August has been a busy month here at Marvellous Murals. At the beginning of the month, Dean came back from Wales for a few days to help me paint the outside of the Fountain of Ale, a pub by Sittingbourne Station that has recently changed ownership so was having a bit of a makeover. I designed the logo for them a few months ago when the client first got in contact. Once the pubs exterior had been repainted and we had some space in our schedule, we were able to start the mural. Dean painted the logo whilst I painted the sign writing for the name of the pub. This was drawn out using a cartoon (I projected the lettering onto large piece of card and then punctured holes into the corners of each letter. I positioned the templates in the centre of the space and made marks through each of the holes. Once the template was removed I could join up all of the dots and using masking tape to paint the straight lines, paint in the characters) which is a good way to paint lettering when you aren’t able to project onto the wall and when a stencil would not be precise enough. Dean used the grid method to draw out the logo and then painted it all freehand. He did this on very high scaffolding, and I was very happy that I only had to go up there once to remove some chalk lines for the grid, as coming down was not an easy feat (I’m still very scared of heights, apparently) but after a lot of deliberation and coaxing I managed to stop shaking long enough to get back on solid ground! 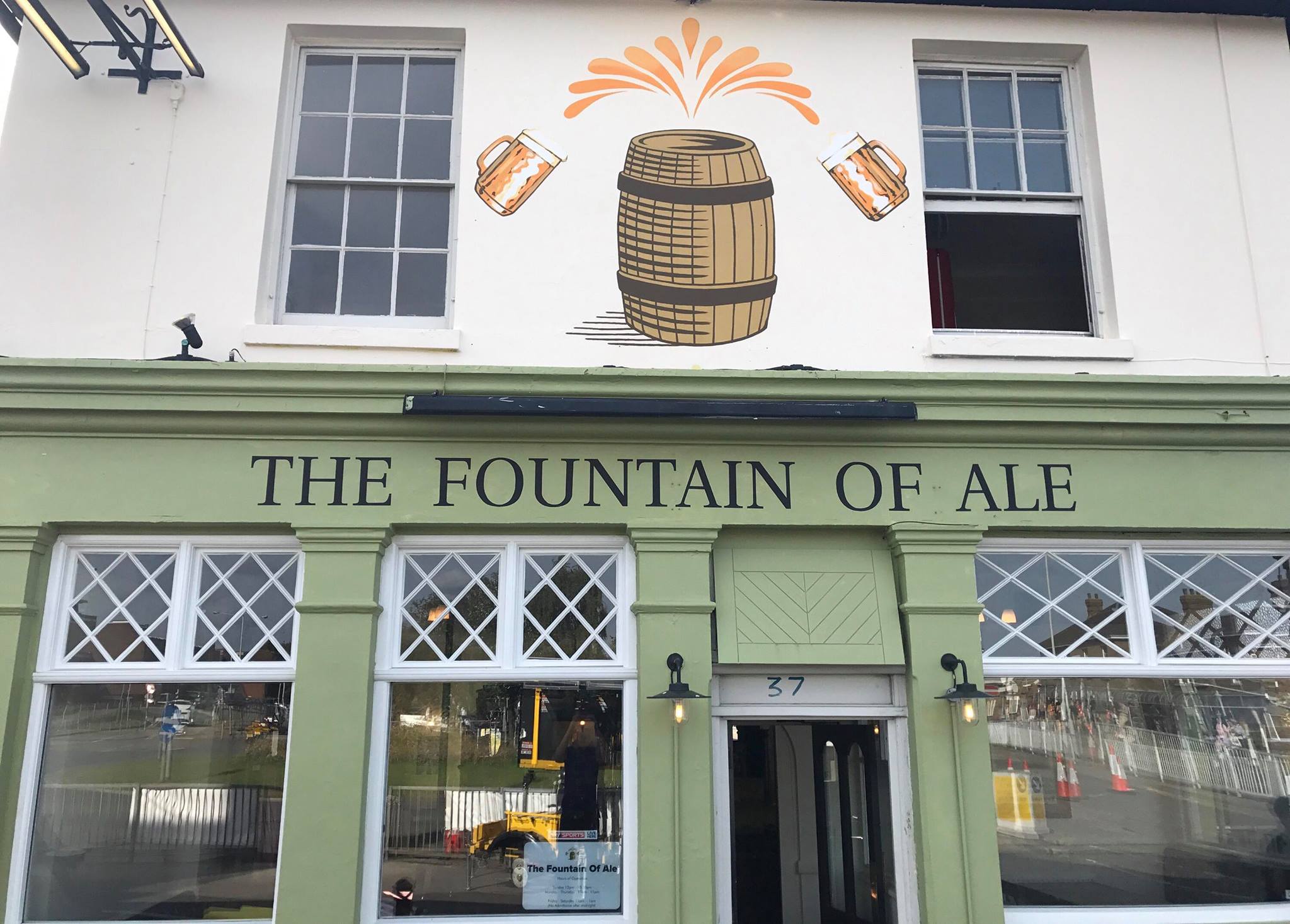 On the 30th of July I was joined by my sister, Sophie, at the Westgate Arts and Crafts event in Canterbury, where we were asked to do some chalk art around the event. We started by chalking a large version of the Westgate Arts logo by the entrance to the park. We then spent the rest of the day creating many colourful floral pieces of chalk art (including some huge daisies) dotted around the park as well as spending a few hours in the afternoon doing a children’s colouring event at the Kid’s Cove, where we drew lots of outlines of wildlife and nature related things for the children to colour in. This was a great success and we got lots of very interesting requests from the children (my favourite being a space rocket and Saturn… not quite wildlife, but still nature themed!). The whole day was a lot of fun and the weather was perfect, so hopefully they will hold it again next year. I also got some of the best maple and walnut fudge I have ever tasted from one of the stalls, so that was a bonus! 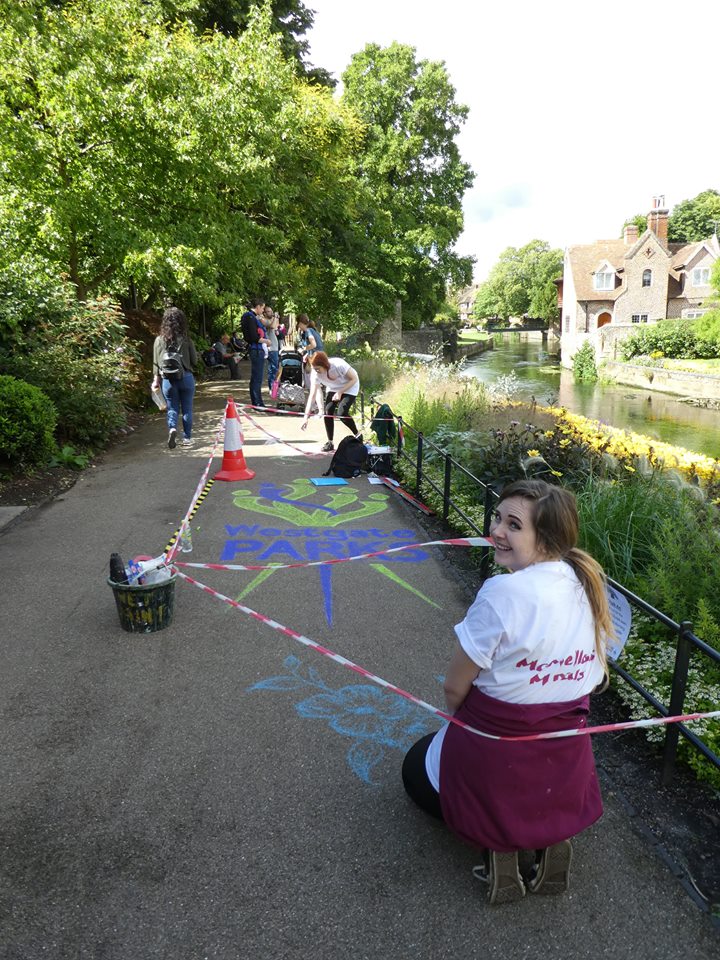 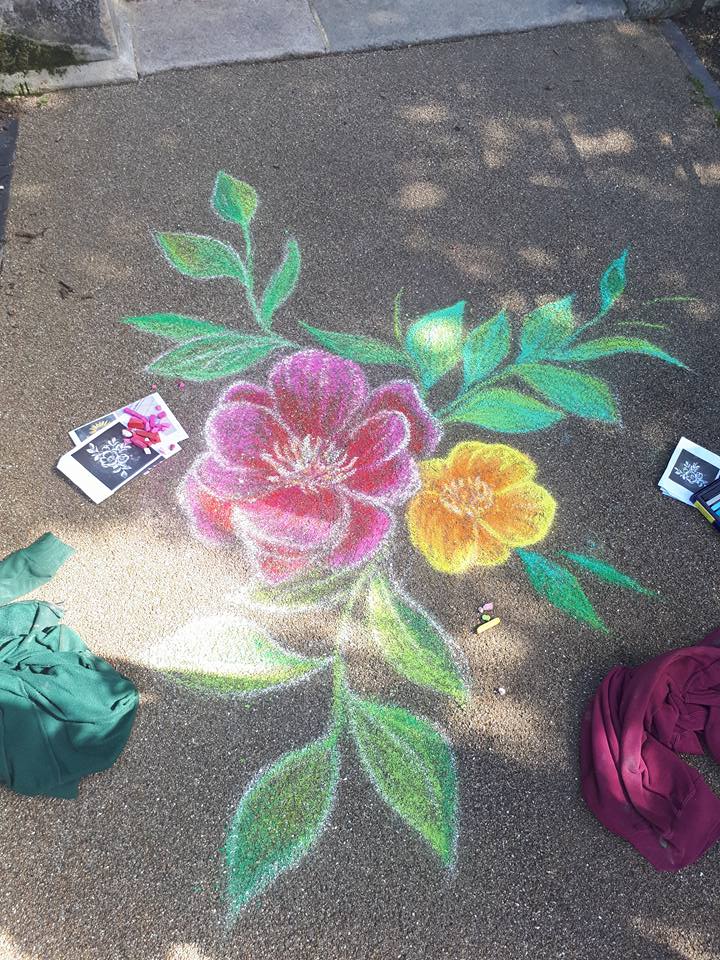 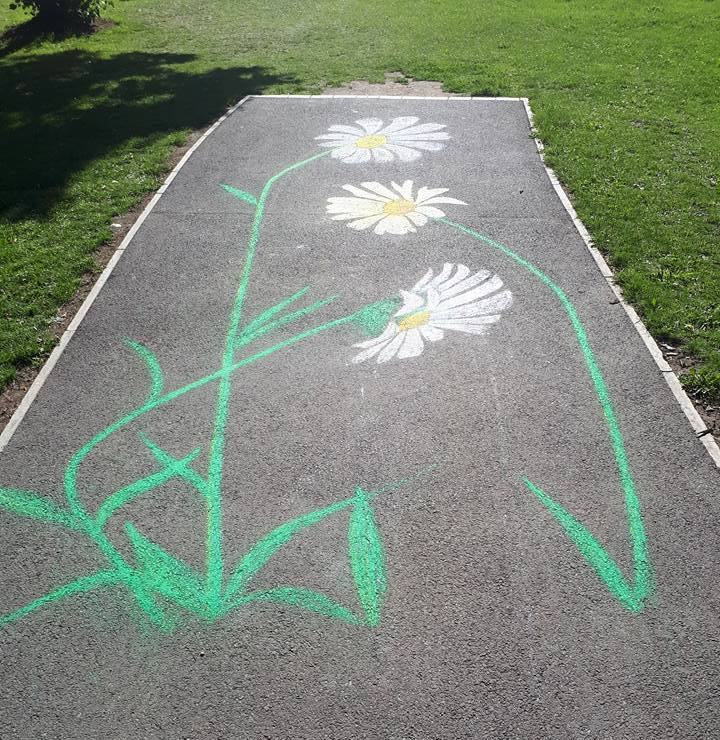 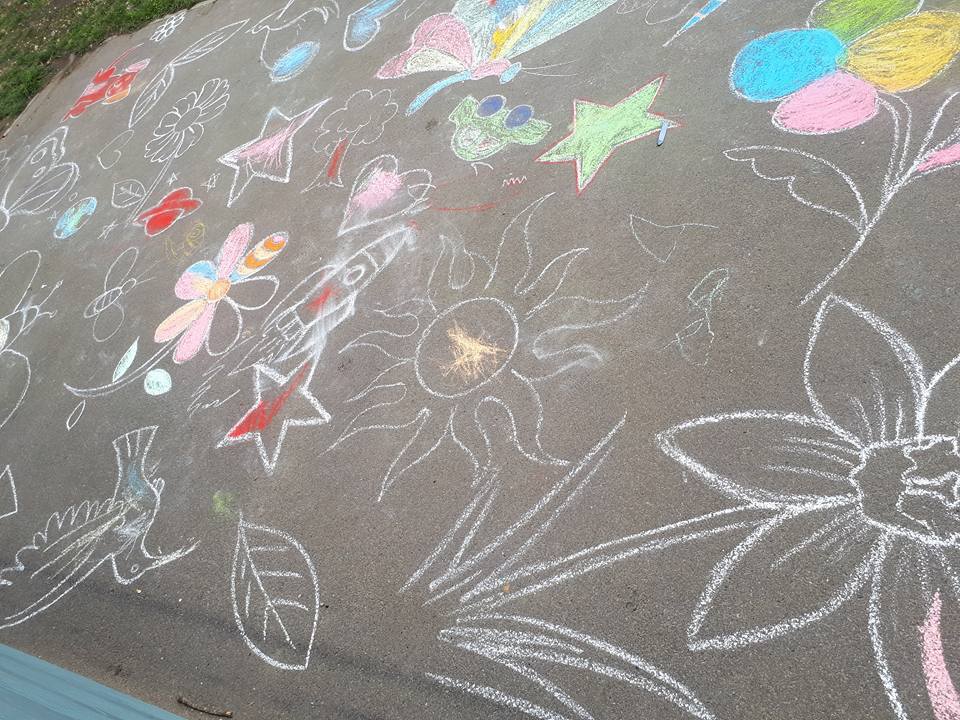 Once Dean had returned to Wales I had another job at the Fireball Pizza Company in Bromley, who we have done lots of work for in the past. They’re going through a gradual refurbishment at the moment, as they want their restaurant to be themed with the weird and the wonderful to be an experience for its diners as well as serving excellent food with lovely staff. This time they wanted the large back wall of the restaurant to have a constellation theme. They painted the whole wall black, so I could start straight away with painting. First I painted thousands of starts over the whole wall. I then (using another cartoon) painted the words ‘Welcome to the Fireball Observatory’ in a twilight zone themed font that I designed. I then painted seven of the owner’s favourite constellations, with the animal or character of each constellation in blue and the name of the constellation next to it in the same font. Normally I would project something this size, but due to the large skylight directly above the wall I wasn’t able to do this. Instead I made some rough templates for a few of the constellation and the others I drew free hand. The end result looked really cool and added to their new overall theme and it was really fun to get to paint something that was based on some of my favourite things – astronomy and mythology! 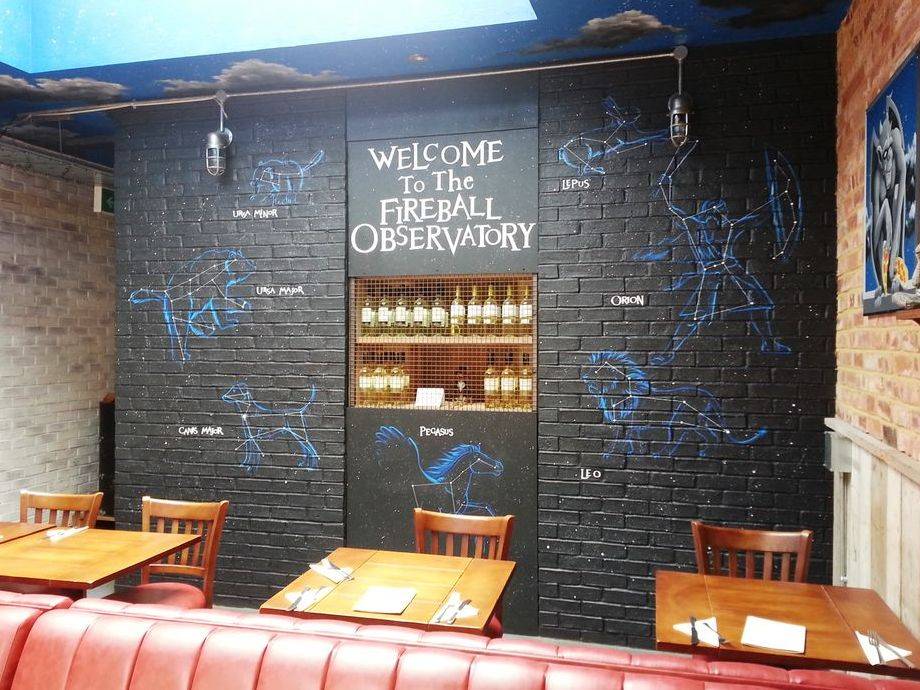 For the past two weeks I have been working at Kent College in Canterbury, painting in their newly refurbished boys and girls bathrooms. I have been working alongside an interior designer – Lisa Honiball from Honiball Interior Design – which has been a new experience for me. The toilets were supposed to be completed fitted by the time I was due to paint, but unfortunately due to timing restraints and other setbacks, they were only just starting when I arrived. This has been doable, but not ideal, as I’ve been working around plumbers, electricians and builders, making it a slower process than normal. Everyone has been really flexible which has made everything go a little smoother and by working for a little longer once everyone else has gone home for the day and at the weekends, I only have a little bit left to paint in the girls bathroom, ready for the pupils return to school next week. In a way it was good for me that the toilets etc hadn’t been fitted, as it meant I could get up close to the walls! There have been a lot of challenges with this job, such as painting a huge blossom tree on my own and a large orange stripe that circles a room across the ceiling and down both walls (this one stumped me for quite some time!), but with help from the maintenance workers allowing me to borrow their ladders (and keys to lock up after myself!) and the electricians for showing me how to use their laser spirit level, I’ve managed to overcome pretty much all of the obstacles that got thrown at me. I will be finishing the murals in both rooms with a heavy duty glaze to allow for more thorough cleaning, without the fear of rubbing the murals off of the walls! 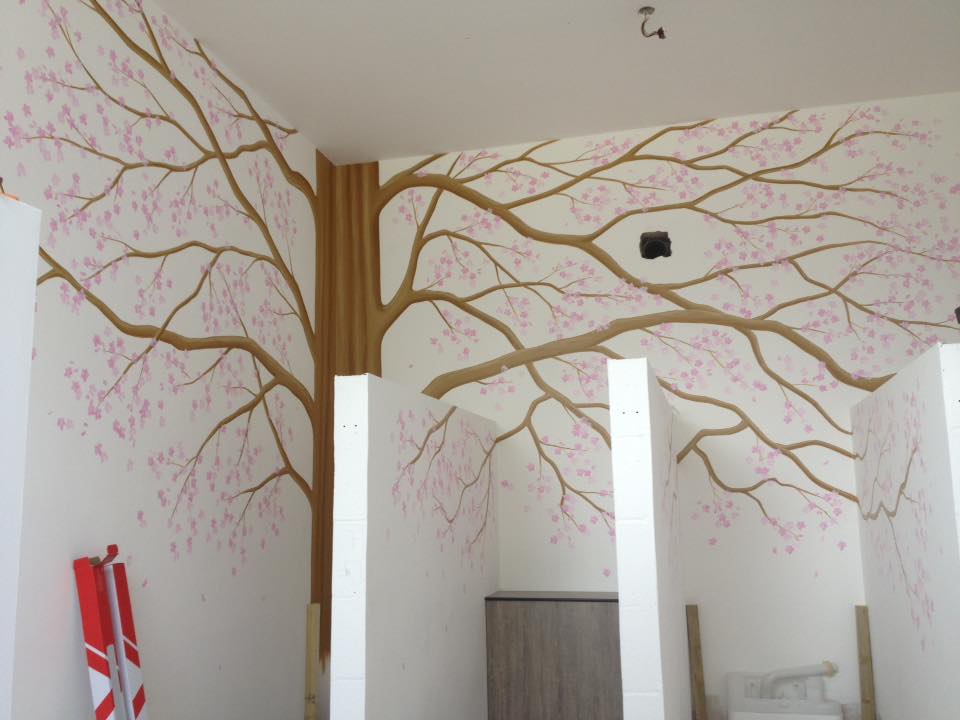 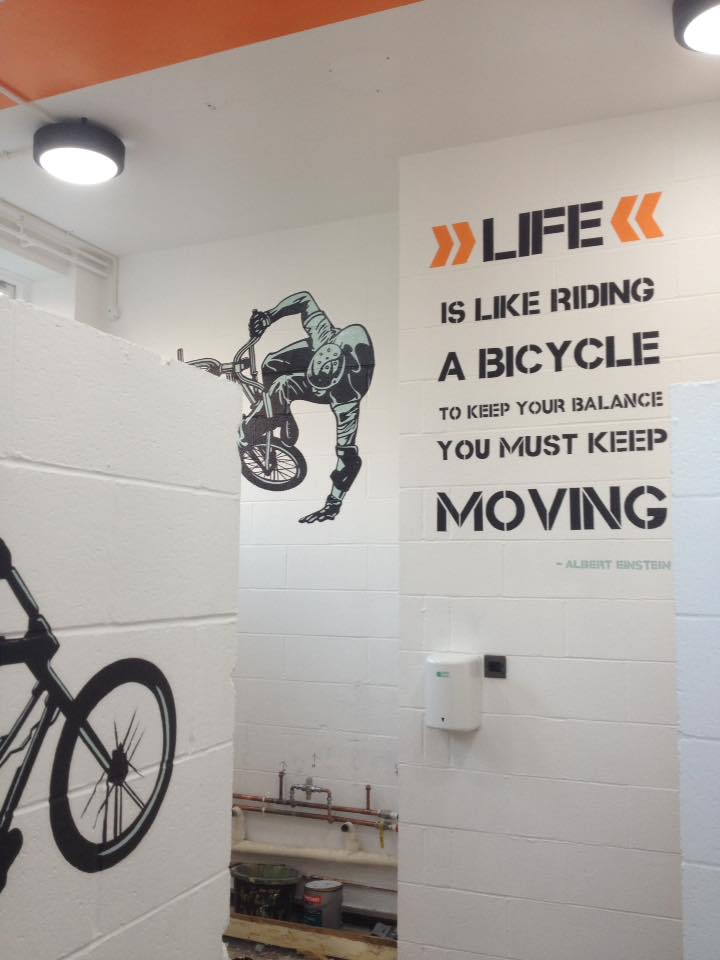 Next week we’re in Wales (nope, not at Deans Zoo!) painting a little girls bedroom for a client who we have worked with in the past.

I hope everyone is enjoying the last dregs of the Summer, though as much as I love the sunshine and light evenings, it’s getting to that point in the year when I am secretly looking forward to Autumn – fallen leaves, pumpkin spiced everything, Halloween, scarfs and big coats! My favourites. I’ll also enjoy not applying factor 50 every time I step out the door. Though painting exterior murals does get a little less pleasant the closer we get to Winter!