Ceilings, Stairwells and an Underpass.

I haven’t written the blog since September, the months are just flying by and now Christmas is just around the corner! We’ve been keeping ourselves busy with lots of different murals, big and small.

In September we had the pleasure of being a part of a community art project at Nucleus Arts in Chatham, running workshops for the Young at Art over fifties art group to create a community mural. Over the course of two sessions we assisted the group with making stencils based around the subject of nature which were then spray painted onto a hand painted tree at the end of each branch. This was a very bright and colourful mural which really cheered up the space at Nucleus Arts and was a great way for each member of the group of make something personal to themselves which worked together to create a public piece of art, as well as getting some experience with stencil making, mural painting and working in the public domain. 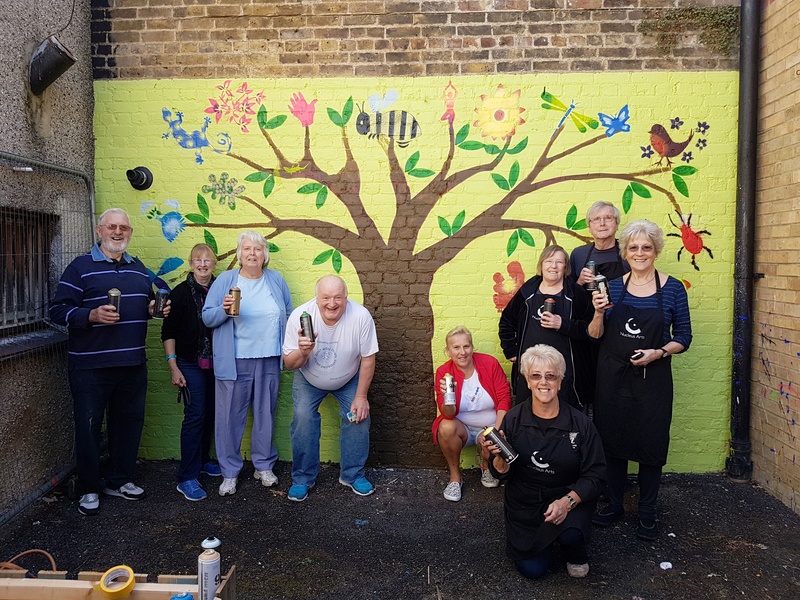 Next up we had The Incredible Hulk and Spiderman to paint! Dean and I are both huge comic book fans, so we always enjoy painting anything DC or Marvel themed. It took us three days to paint the life sized characters in a very excited little boys room. 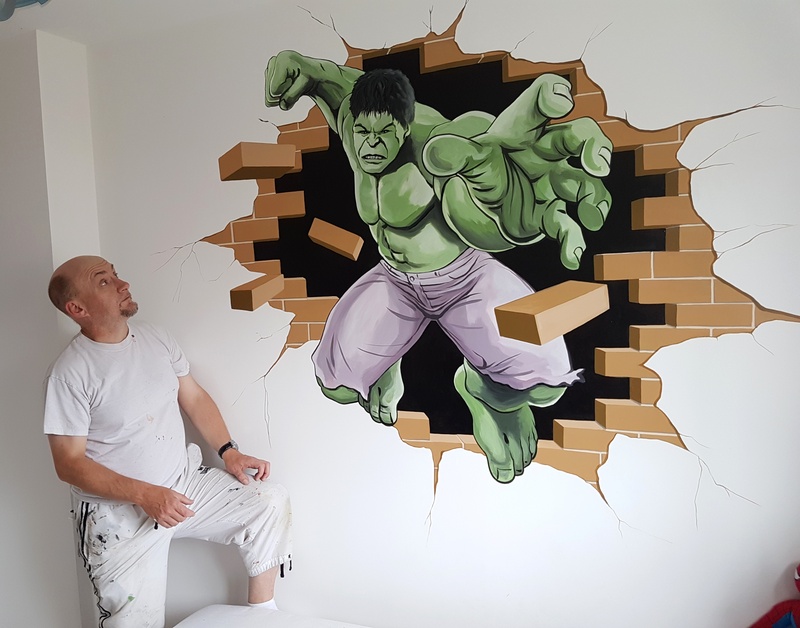 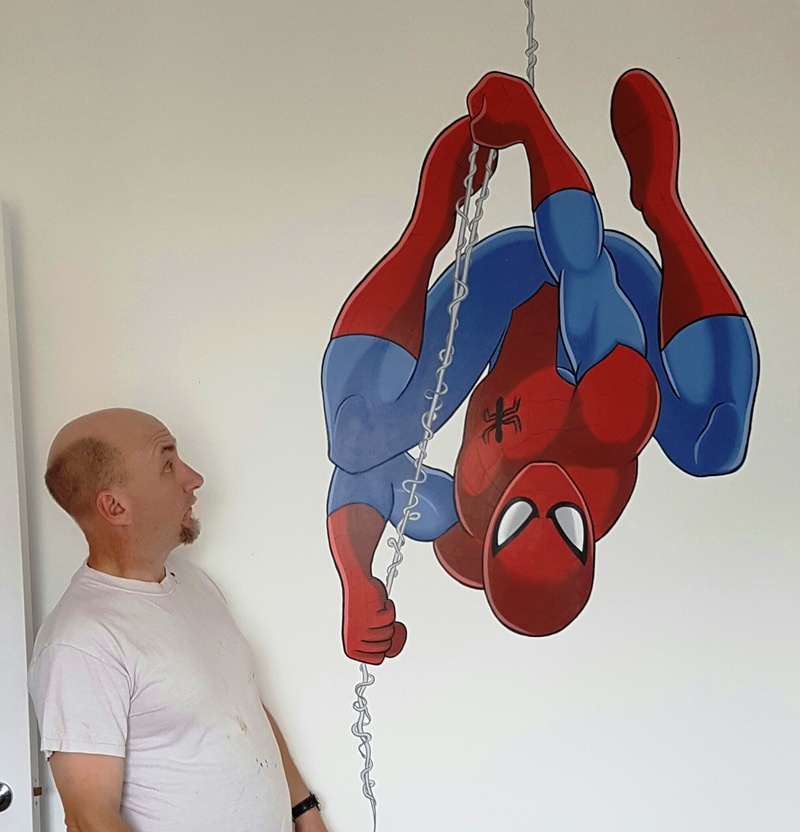 The parents asked us back a few weeks later to paint a Beauty and the Beast inspired mural in their little girls room. We painted a simple background of blue sky and a grassy hill, then painted the Disney castle on top of the hill with Belle in the Foreground and The Beast welcoming her. Whilst I painted Belle, Dean painted various other characters from the film around the room, including Chip and Lumiere, to add to the theme and make all of the walls tie in with the main feature wall. I really enjoy painting Disney Princesses, I think because I was such a fan of Disney when I was younger, it’s very nostalgic for me and I just really like painting pretty things or anything we could possibly add glitter to! 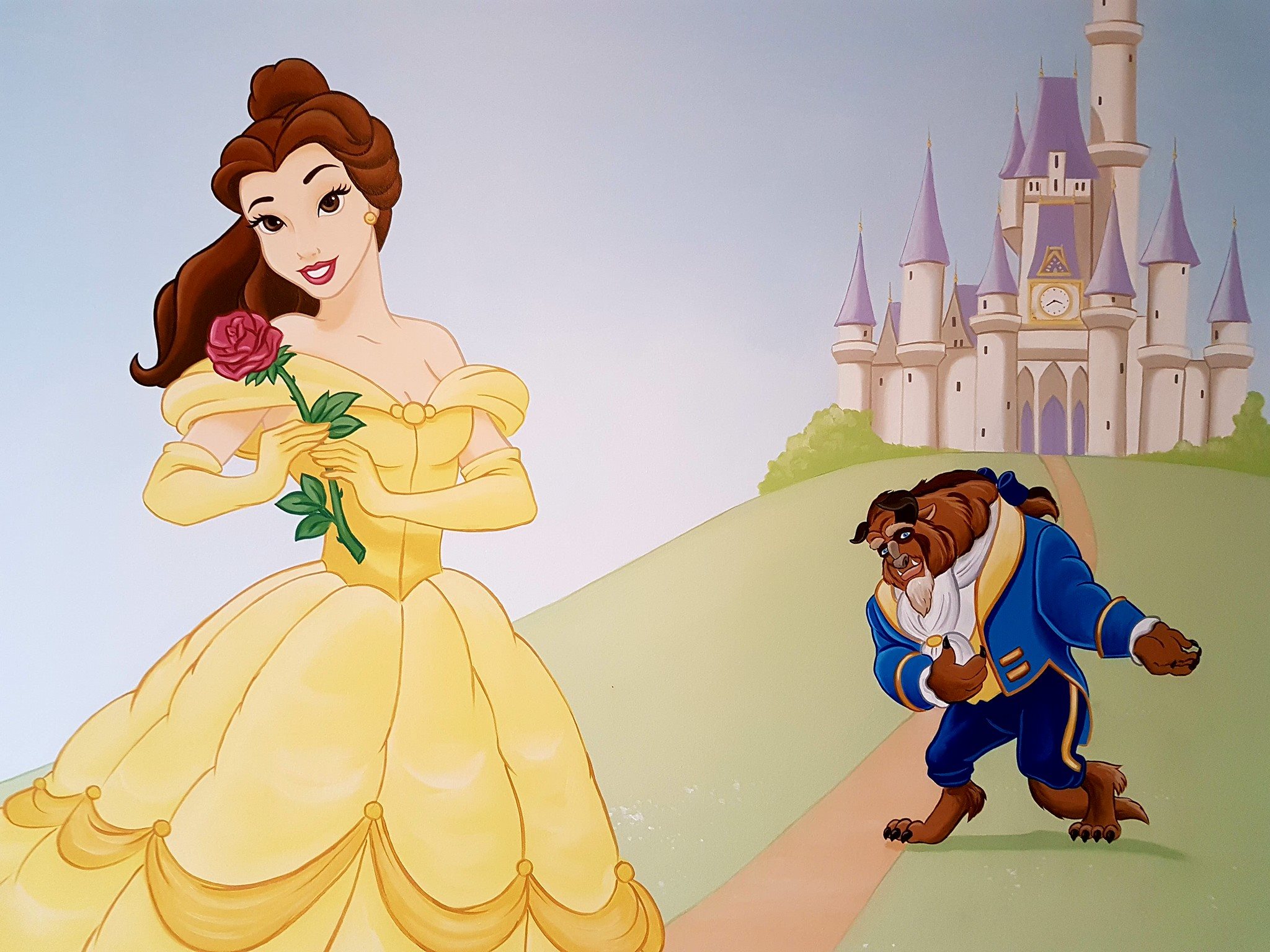 As part of the Paint the Town Festival in Medway at the end of September, we did a large piece of Chalk Art outside of Rochester Station. For this, we enlisted the help of some volunteers from the local art collage, who assisted us with drawing out and colouring a large optical illusion of a multi-coloured vortex disappearing into the pavement. We completed this in one day. Once we had finished, the public could stand on the artwork and interact with it, taking photos and using social media to share their photos and spread the word about the Festival. 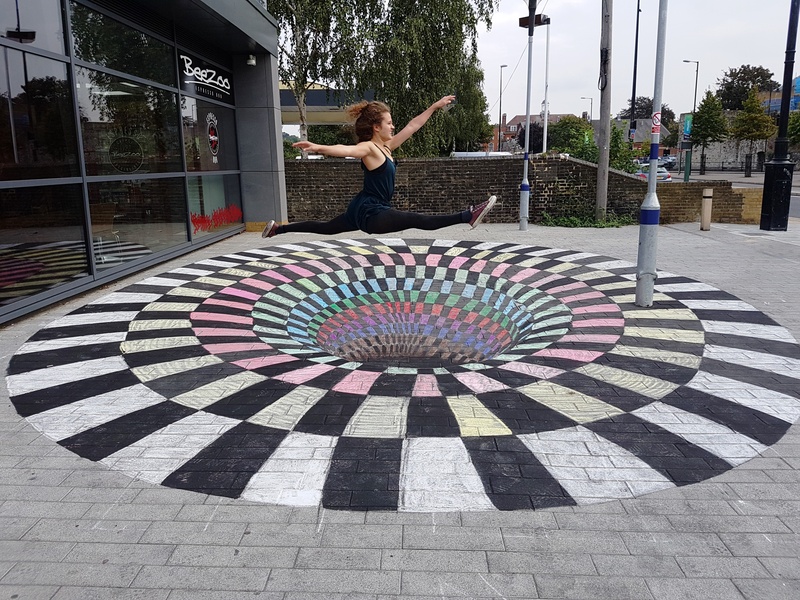 After this we had two very interesting jobs come up for two members of the same family, in their respective homes. Both the mother and daughter wanted their living room ceilings painted, which is always a bold statement in a home. Originally they were both wanting the same design, but after some thought they decided to both go for something different. The first was a cherub inspired ceiling, with a blue cloudy sky and two sets of angelic cherubs in the centre of the ceiling, holding a garland of flowers that went around the main light fixture. We started by drawing out the cherubs and then we could paint in the blue sky and clouds. Whilst Dean focused on the clouds and the flower garland, I set to work on the cherubs. The colour pallet was very subtle with each cherub having rosy cheeks and golden hair and wings. We accented the cherubs and flowers with gold leaf, to make them stand out and have a classical, luxurious feel to them. 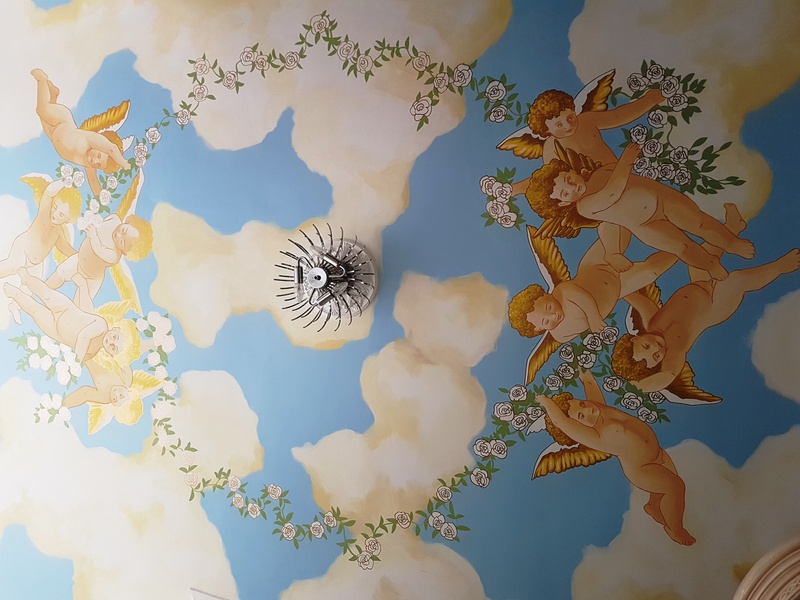 The next ceiling was Versace inspired, with ornate black and gold patterns in each corner and a centre piece of women’s faces and two lions either side of a chalice. The patterned corners were achieved by making one very large stencil which we used as a basis and then we re-painted all of the lines by hand to make them crisp and neat. The entire centre of the mural was painted gold (which took all of the gold spray paint available for purchase in Sittingbourne!) and the lions in the middle were achieved with gold toned acrylic paints. We had a few setbacks with the stencil (gravity was not our friend) but once we had finished, the mural was really effective and looked very grand. 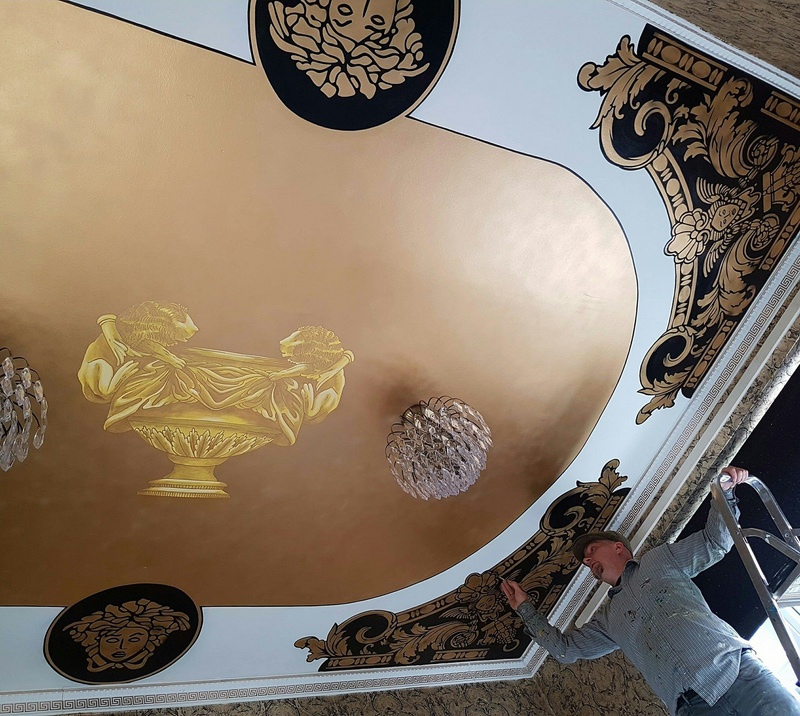 Our next commission was to paint a beach scene in a lady’s bathroom, featuring her two young children walking along the sand. Deans back was really playing up, so I had to take the lead on this one which was a little daunting. I started by drawing out the landscape and then I projected the photograph on the two little boys to ensure that I got them the correct size. This took about three days to complete and the client was very happy with the outcome. Their bathroom was decorated in very neutral colours, so it worked really well having one wall with a pop of sea side colours as a focal point. 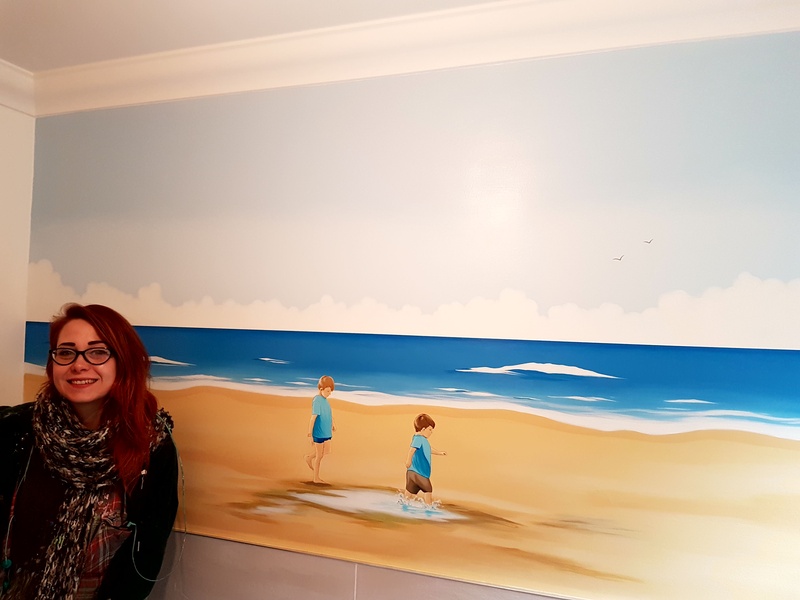 After this we were back to Furness Primary school in London to paint another stairwell for them. We painted their canteen and two of their other stairwells last year. They wanted the two new stairwells painted the same as the ones we had painted previously. The design was quite simple – a background colour of pale yellow, with swirling multi-coloured lines going down the entire length of the stairwell. The sheer size of the stairwells and the fact that the school half term is only a week, meant that we had to get in extra help and work over the weekend to ensure that the work was finished in time for the pupils return. We had three great helpers with us throughout the week - . Nazine and Louise Hanson and Tasha Collins, without whom we would not have been completed on time. 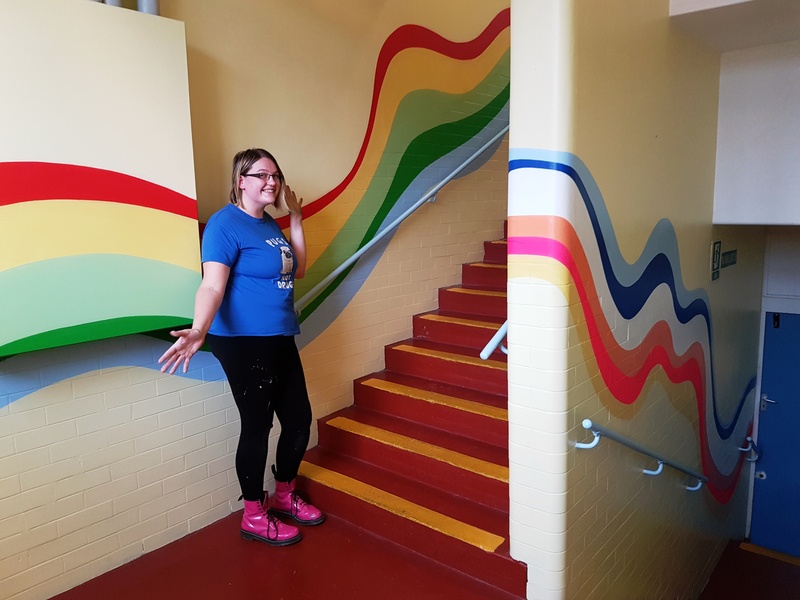 After this we had a nice little two day job, turning a young boys room into a WWE ring! He had a square room which was perfect for this idea. In each of the four corners we painted a post and then using a stencil that we made, added the WWE logo. We then connected the posts by painting ropes around the outside. This design, although simple, was really effective. 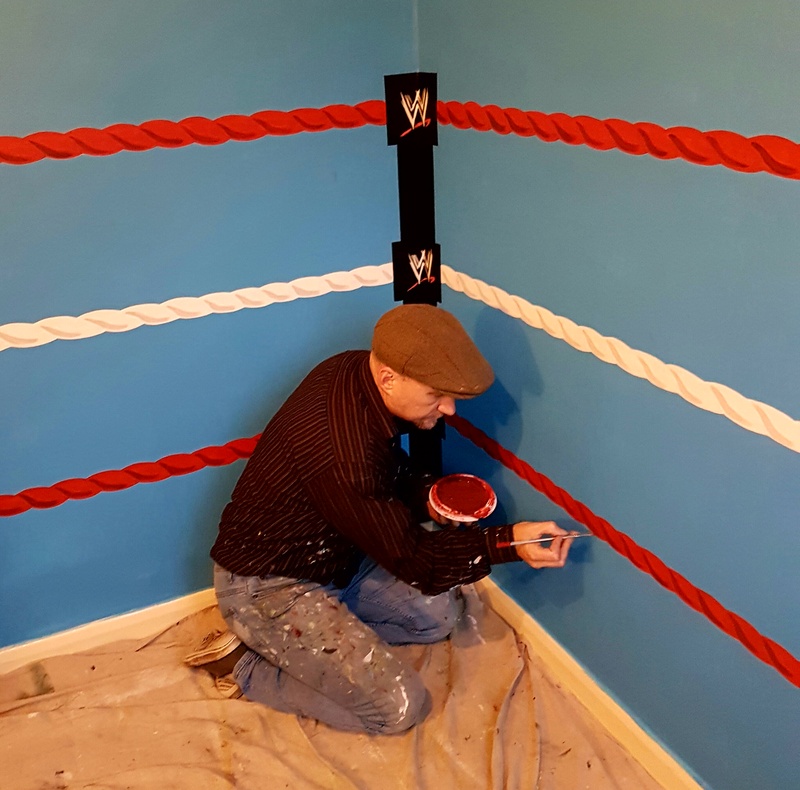 At the beginning of November, we started a very long (very cold) job in Wokingham, painting an underpass with a garden landscape mural. In April of this year we painted another underpass for Wokingham Council with a woodland theme, but this time they wanted something a little more colourful. We started painting at the beginning of November, and unfortunately had to spend a week preparing the walls (This involved a LOT of sanding, chiselling, hole filling and primer painting) as this had not been completed by the time we were supposed to be starting. At the start of the second week once this was all done, we gave the ceiling a nice fresh coat of white paint whilst Dean started sketching out the design. We had Sam helping us for the month, who is an incredible painter, in the hopes of getting it completed in a shorter amount of time. Once the design was roughly drawn we could start blocking in the back ground colours. We then painted the sky with a blue gradient and began work on the trees in the background, which we decided to paint a pale lilac and blocking in some bigger patches of grass and other bushes. We were quite happy with the progress we had made, but mother nature had other plans for us. Despite the underpass being mostly undercover (aside from a little at each end) we thought we would be safe from the rain and whatever other weather was thrown at us. Unfortunately, there was a lot of fog that evening/morning, and this caused the walls to become covered in a dripping layer of condensation. After a three hour drive to Wokingham, we got out of the van ready to carry on and our hearts sank as we realised everything we had painted the day before was now mostly on the floor in big puddles. The spent the rest of the day mopping it all up and drying off the walls with tissue, in an attempt to give ourselves a paintable surface once again. The next day the nature gods were with us, and the wall was dry and able to be painted on once more! For the next few weeks we continued to add in the background and then started painted the foreground and details, adding lots of colour as went. In the fifth and final week (we had a new job starting the week after) we hoped to get the final section finished and to add an anti graffiti varnish to the whole underpass. However, due to another condensation set back (another morning greeted with paint puddles) and the fact that the varnish can only be applied if the temperature is above 7 degrees (it hadn’t been past 4 degrees in the days leading up to this point, really not the most pleasant weather to be painting outside in!), we had to admit defeat. We will return in the Spring to finish the mural and touch up any areas that need it and to apply the anti-graffiti varnish. 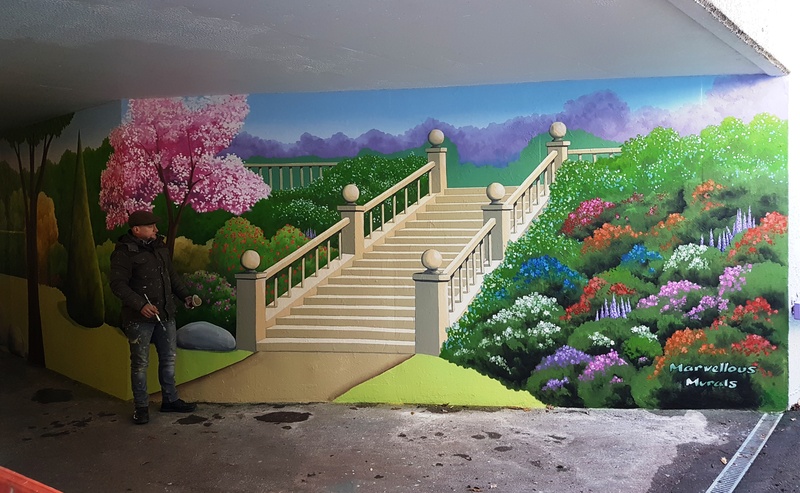 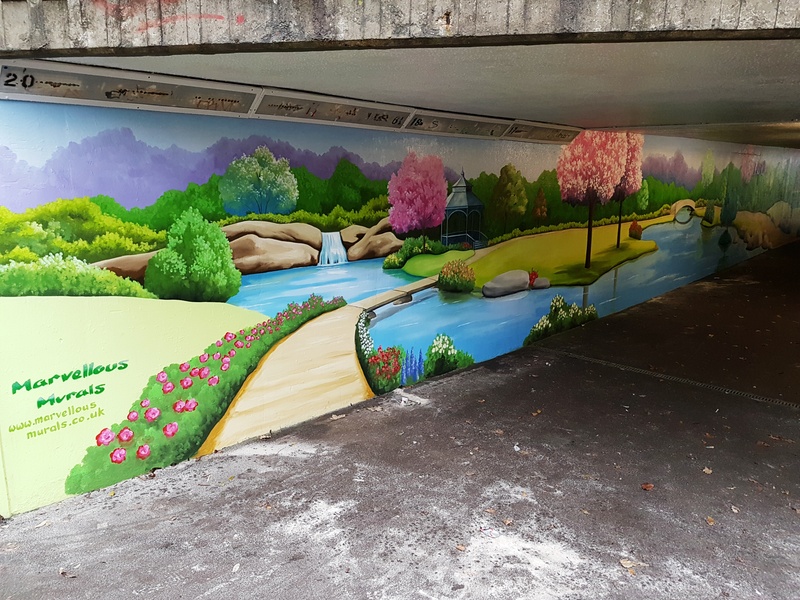 This week we have been in Bearsted painting a trompe l’oeil garden scene in the orangery of a manor house. We started by drawing out an archway for the illusion to be seen through and once this was roughly painted Dean started to sketch out the main design. The client wanted Leeds Castle to be a prominent feature, so we based the design around this with gardens and trees in the foreground and some Kentish countryside in the background. We still have a week left on this mural, which will take us right up to Christmas Eve.

(Edit: we have now completed this mural, I've just taken ages to upload the blog!) 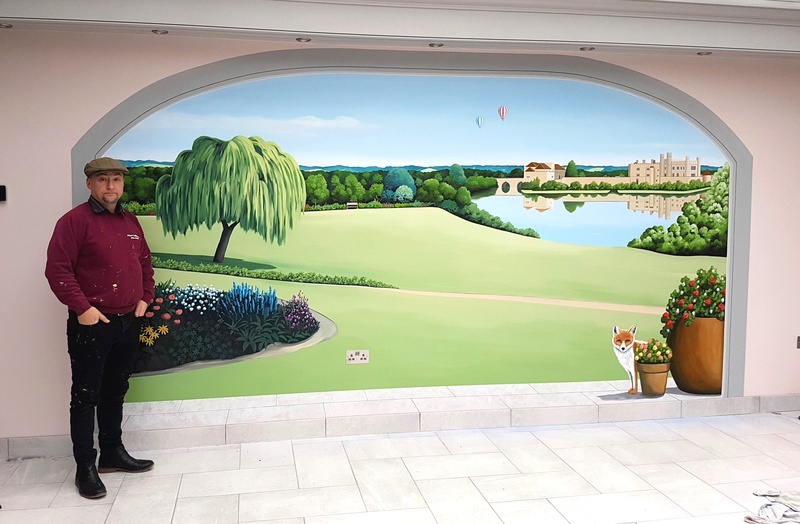 We already have some interesting projects booked up for the New Year, so keep checking the facebook page to see what we’re up to!

I hope you all have a wonderful, relaxing Christmas, full of food, drink and merriment!

See you in the New Year,